Tiana Kocher teamed up with multi-platinum recording artist and rapper Sage the Gemini for her latest single release, ‘Take Over’, which she wrote with GRAMMY award-winning writer Candace Wakefield, and Sage the Gemini.

Releasing through Manila Music, the ‘Take Over’ music video was directed by Ali Zamani and produced by Zeus Zamani of AZ Films. Set on a Southern California sun drenched backdrop, ‘Take Over’ is a song about love, but through the eyes of both the male and female’s perspective of a couple finding each other and “taking over” the world together.

“Take Over’ was one of the first songs I ever recorded in Los Angeles,” says Kocher. “I recorded and filmed the music video over two years ago during summer 2018, and it was my first song working with a feature. I had an incredible time working with Sage, who ended up being one of my closest confidants in the industry. I consider him my big brother. I was fortunate enough to be able to work really closely with AZ Films to create a visual that matches the energy of the song. We always want to outdo ourselves, so we came up with the idea of filming the music video on a yacht! I had such a great time working with my closest friends on this music video.”

Sage the Gemini has been featured on several award-winning songs including records with Chris Brown and Flo Rida, and has produced a multitude of songs, most recently for Tinashe and Tyga. 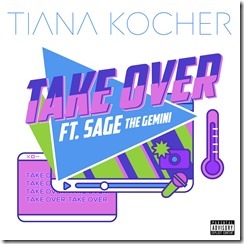