Who’s looking for a good song that will rock them to their bones? If that’s you, then welcome, sit down a while, ‘cause we’ve got just the thing for you – this hot new remix just dropped into our hands and we don’t know how to spread the word faster, ‘cause it’s a killer.

Bringing together the voices and musical presence of two amazing, strong and highly skilled female artists and emcees, SpeakingofKakes (Kakes, for short) and Nitty Scott, the remixed “Cherry” is, well, how should we put this, the cherry on top of the cake!

Right off the bat, it’s a fiery and intense combo that gets your blood boiling and your imagination going. The lyrics make it an exciting and sexy collab, but the sort of sexy where the woman (or in this case, women) is in control the whole time. These two amazing ladies have such an intense chemistry that they truly sound like a dream (listen to it, you’ll get the reference!).

“Cherry” is a free style masterpiece from two of the most accomplished artists in this oh-so-versatile genre, if you can describe it as such. Kakes is an up-and-coming artist from Bakersfield, California, who’s just gearing up to release her first project with hOLLANDjUNGLE Productions.

She’s got bucketfuls of attitude, which she throws right in your face, but with such charm and such a compelling bass sound that you can’t resist coming back for more. Equal parts brazen rebel and free spirit, Kakes is set to top the charts in the coming months with her new project, which is where “Cherry” hails from. The track is exciting and a fresh sound, not to mention making waves across the music scene, so we’ve got every reason to assume the rest of the project will be the same.

And then we have Nitty Scott, another fascinating freestyle voice, this time from Brooklyn, New York, whose “Monster” freestyle video went viral in 2010, when she was just 19 years old, and she’s been building a solid fanbase (not to mention putting out some killer tunes) ever since.

Together, these two fantastic freestylers are sure to rock your world and put some attitude in your step, so stop what you’re doing and go give “Cherry” a listen. 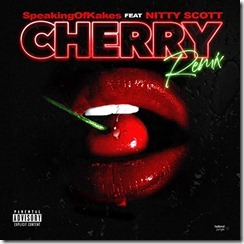