Introducing the fantastic up and coming 21 year old artist Kerri Hayes. Kerri Hayes was born in the little town of Elkin, North Carolina and raised up in Atlanta ,Georgia. Since the age of 3, Kerri Hayes has wanted to fulfil her dreams of being an artist and actress.

Kerri Hayes Pops out music you can vibe To, Her Song “Guard Fall” is the first song she ever wrote and she wrote “Bestfriend” not long after and that was her first song ever recorded. Her Single “BIRTHDAY” was released Sept. 30th 2020 and you can stream it on Spotify, Apple Music and more, She is expecting to work on that music video soon. In The Rise in Her Career She Hopes to Expand her audience and perform in front of a Large crowd, and collab with Other Artists.

Since her start in 2018 ,She Has Already recorded at De3 Studios, LoudHouse Studios, and more. Influenced by Artists & Directors: Fetty wap ,Mulatto , Tyler Perry & Gucci Mane. “They all are so different but have a few things in common,Their hard work and determination & drive for success.” Rising Up from a situation of lesser and Standing for something while Staying humble,II Respect Them For that.”

Kerri Hayes is ready to release more music, And she believes she will go far as long as she “Keeps god as her #1 & Always know to keep her faith” She says. 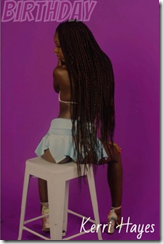